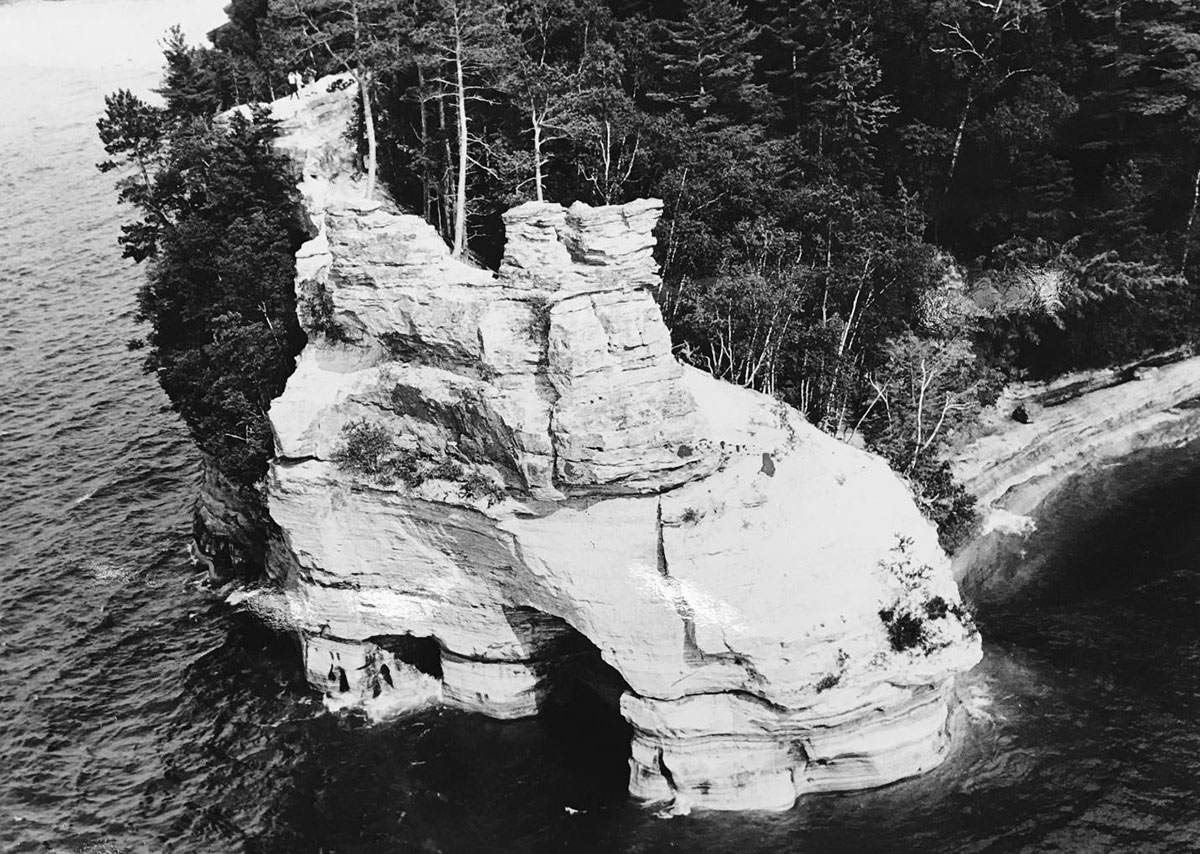 Presently, kayak and boat tours of the Pictured Rocks are offered in Munising, the park’s westernmost gateway community. While hundreds of thousands of people flock to the area to bask in the serenity, the magic of the colorful cliffs, sea caves and sandstone formations in the Pictured Rocks park is still untouchable after all these years.

Ever wonder what the park looked like years ago? Take a step back in time and check out the following historic photographs of the Pictured Rocks: 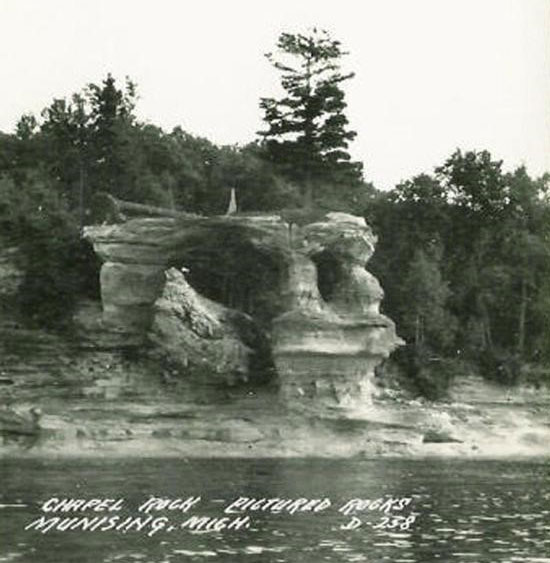 Chapel Rock, a landmark in the Pictured Rocks National Lakeshore, in the mid-1900s. Photo courtesy of National Park Service.
The earliest known documented account of Pictured Rocks was in 1659 by Pierre Esprit Radisson, a French fur trader who captured the beauty of the area. “We go along the coast, most delightful and wonderful,” Radisson wrote. “Nature has made it pleasant to the eye, the spirit and the belly.” According to Radisson’s account, Native Americans would give gifts to the rocks, stating that they’d “fling much tobacco and other things in its veneration.”

The Schoolcraft Blast Furnace, now where Munising Falls in the Pictured Rocks National Lakeshore is located, is pictured. Photo courtesy of the National Park Service.
The Schoolcraft Blast Furnace was one of 29 furnaces that operated in the Upper Peninsula during the iron ore boom and was responsible for the early development and prosperity of Munising. In its heyday, the furnace could produce upwards of 20 tons of pig iron per day. Munising Falls now flows where the blast furnace was located. Visit the Munising Falls Visitor Center for a ‘blast’ from the past to learn about the furnace and how it changed the area you can walk in today.

Best Waterfalls of Michigan’s UP

Cruising the Cliffs in the Early 1900s 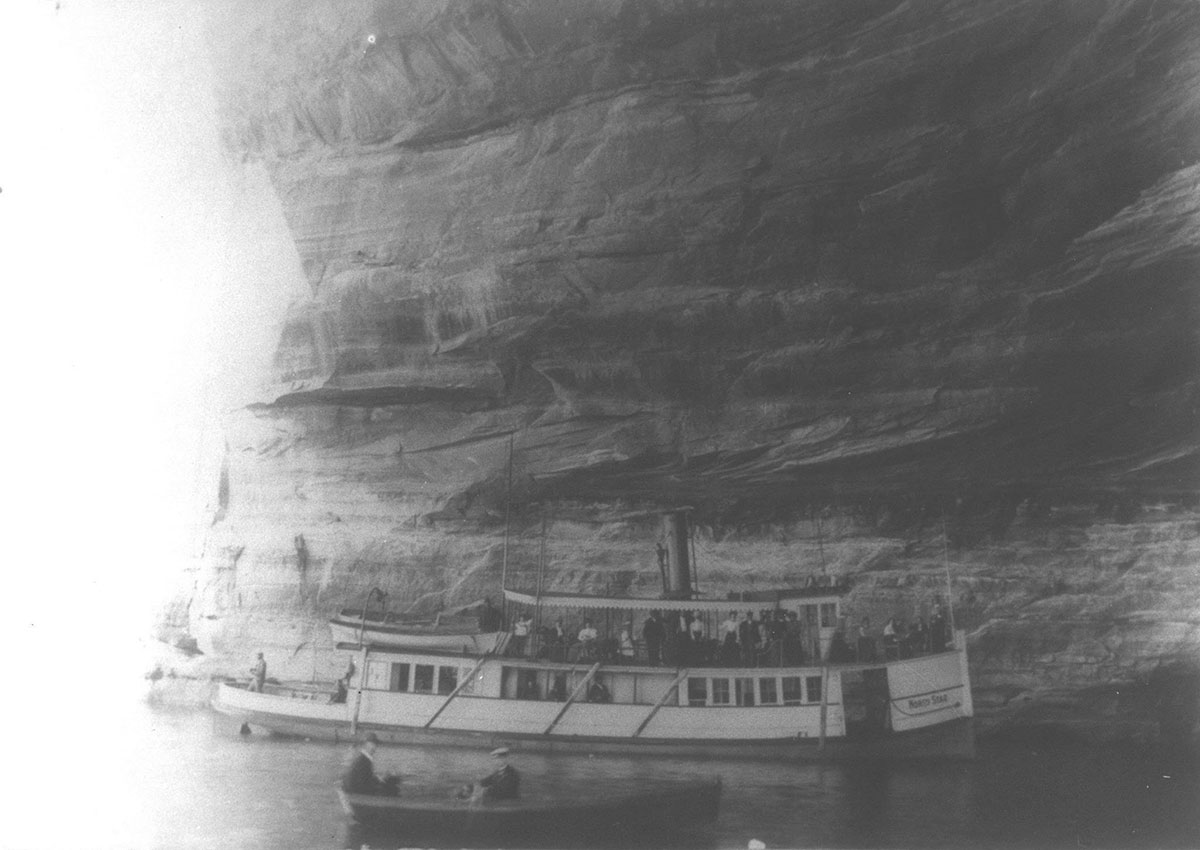 A boat cruises along the Pictured Rocks in the early 1900s. Photo courtesy of the Alger County Historical Society.
When a Marquette pharmacist in the 1890s wanted to show his young bride the famed Pictured Rocks, he was obliged to hire a tugboat to make the trip. At a civic celebration in Munising in 1902, excursions were offered on the steamer Hunter for “the large number of visitors in the city who have never had an opportunity for viewing the Rocks,” according to a National Park Service publication. However, the Pictured Rocks were little known and seldom seen by out of state visitors until after World War II. You can still tour the cliff line during the summer with Pictured Rocks Cruises and Pictured Rocks Kayaking. 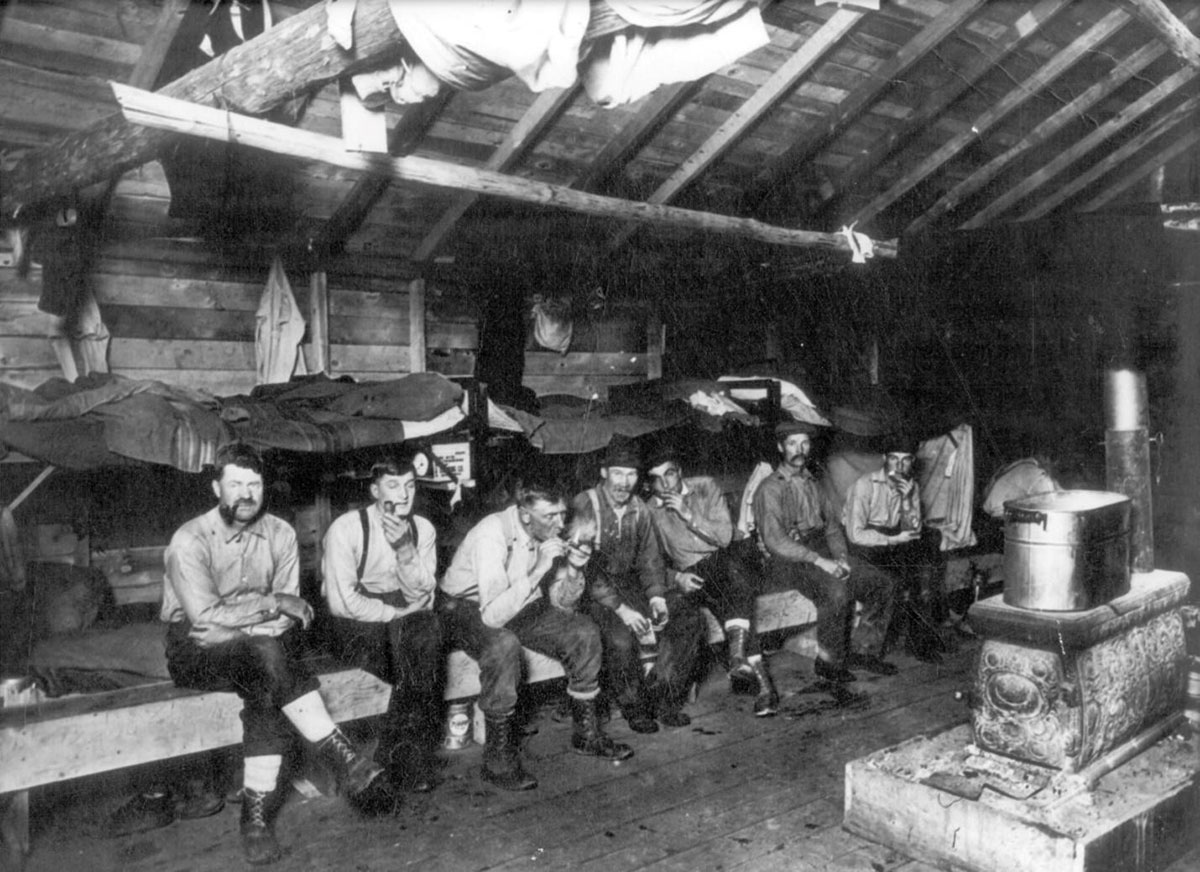 Why You Should Take a Kayaking Tour

Before and after one of Miners Castle’s turrets collapses. Photo courtesy of the National Park Service.
In April 2006, the northeast turret of Miners Castle collapsed into Lake Superior. One turret remains on Miners Castle, the best-known feature of Pictured Rocks National Lakeshore. The collapse was reported via cell phone by fishermen in the area, according to NPS website. There were no injuries. While the rockfall at Miners Castle was startling, such events are not uncommon along the cliffs. At least five major falls have occurred over the past dozen years.

Come see the pristine shoreline as it is today! Kayak or cruise to take in the sights along Lake Superior. 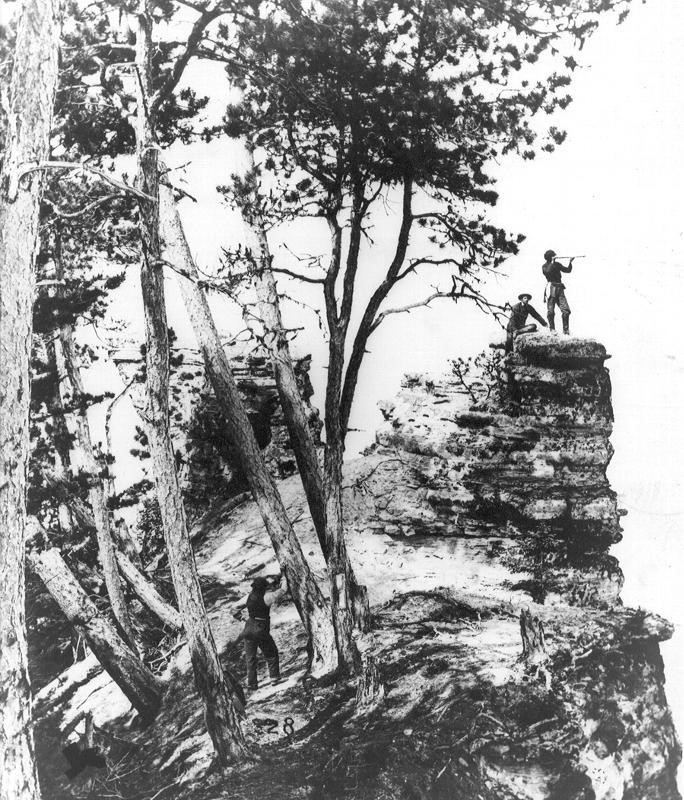